THE UNKNOWN PLEASURES OF GREY GRANITE

Stone Sign Company were recently contacted by a client to recreate the door sign from the famous Manchester club, The Haçienda.

The Haçienda was a notorious music venue in Manchester that was open between 1982 and 1997. It was at the forefront of music and youth culture and is stilled famed today for its chequered history.

Famed designer Peter Saville enlisted his friend and interior architect Ben Kelly to design the club, based in a former warehouse. Rather than a neon club sign, the original Haçienda sign measured just 12 inches and was carved out of granite by someone who made gravestones. 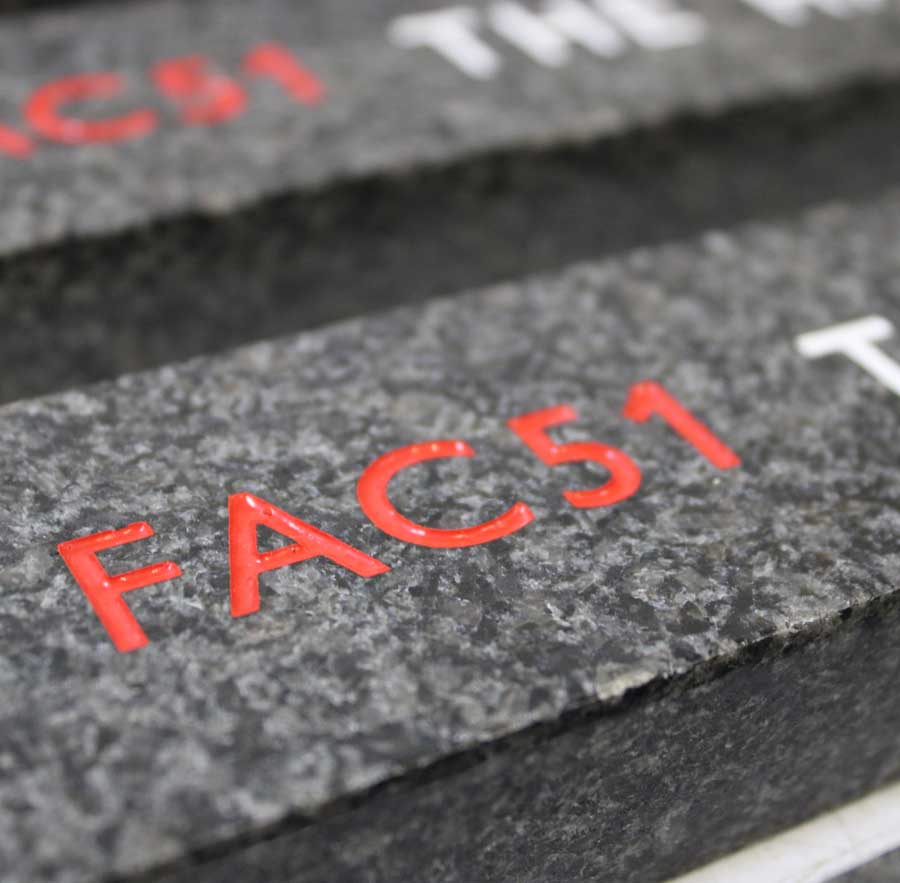 The client had requested a complete imitation of the original door plaque and sent us photos to work from. Our talented in-house designer recreated the design perfectly, and then our skilled masons got to work bringing the plaque to life.

To match the existing design, we used quality dark grey granite to create the plaque. This was then deeply engraved with the lettering and finished with enamel paint to match the white and red colours of the original sign. We provided faceless fixings with this plaque to ensure that the design wasn’t interrupted by any drill holes, allowing a clean and uninterrupted look.

We were originally contacted to create just one sign as a birthday gift, but the client loved the finished product so much that he ordered a further six identical signs to give to friends.

Our expert stonemasons have the capability to bring your idea to life using your choice of quality natural stone. We can replicate almost any design provided, and our expert masons can create a truly beautiful quality plaque that you can admire for years to come.

Any level of intricacy can be realised.

Our expert team can help to bring any stone house sign design ideas to reality. Please contact us today to find out more.

This website uses cookies to improve your experience while you navigate through the website. Out of these, the cookies that are categorized as necessary are stored on your browser as they are essential for the working of basic functionalities of the website. We also use third-party cookies that help us analyze and understand how you use this website. These cookies will be stored in your browser only with your consent. You also have the option to opt-out of these cookies. But opting out of some of these cookies may affect your browsing experience. Read our privacy policy here.
Necessary Always Enabled
Necessary cookies are absolutely essential for the website to function properly. These cookies ensure basic functionalities and security features of the website, anonymously.
Functional
Functional cookies help to perform certain functionalities like sharing the content of the website on social media platforms, collect feedbacks, and other third-party features.
Performance
Performance cookies are used to understand and analyze the key performance indexes of the website which helps in delivering a better user experience for the visitors.
Analytics
Analytical cookies are used to understand how visitors interact with the website. These cookies help provide information on metrics the number of visitors, bounce rate, traffic source, etc.
Advertisement
Advertisement cookies are used to provide visitors with relevant ads and marketing campaigns. These cookies track visitors across websites and collect information to provide customized ads.
Others
Other uncategorized cookies are those that are being analyzed and have not been classified into a category as yet.
SAVE & ACCEPT
Stone Sign Customiser Tutorial
Request A Sample